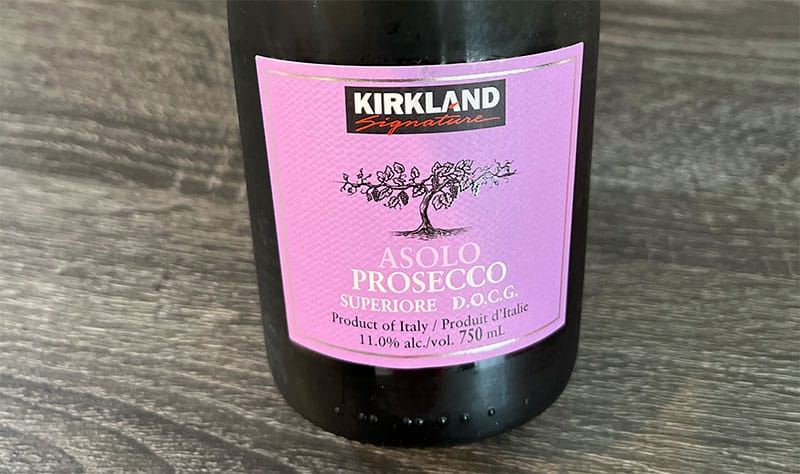 If I’m going to buy a cheap sparkling wine, I tend to favor Cava over the other options.

But it’s often easier to find prosecco already chilled when you’re traveling, and every so often I end up with one that’s not that bad tasting.

So, lately I’d been trying more and more prosecco options at home to see if I can find good, cheap prosecco that I like to drink alone. (the wine, not me)

With a cost of just $7.99 a bottle at my local Costco, this Kirkland Signature Asolo Prosecco Superiore was a recent buy in my quest to find a cheap prosecco.

As expected, this one comes from the Venuto region of Italy and it has a good amount of bubbles.

Like all prosecco, this has a lower alcohol content than champagne, with this one coming in at just 11%.

For me, that means I need two glasses of this one to feel as good as I do with one glass of champagne.

Since I’m not a big fan of prosecco, this bottle sat for several weeks without being opened.

But after buying a large bottle of fresh orange juice from my local Whole Foods, I thought it was about time to test this cheap Costco prosecco and see how it would hold up.

Even though I intended to use this sparkling wine with the orange juice for mimosas, I sampled it plain first to get a feel for how it actually tastes.

Keep in mind that I’m not generally a fan of plain prosecco.

I find this one to be fine, but not great.

The flavors that I’m getting from it are a bit green apple and a bit citrus…though there is something else in there that I can’t quite place but that I’m not a fan of with the other flavors.

It may just be cause it is an extra dry sparking wine, but I’m not sure.

I’ve paid more for prosecco that tastes worse than this one though, so for the money it’s really not a bad prosecco.

That being said, I don’t think I’d ever buy it to drink alone on purpose. (especially since Costo brand champagne is so freaking good!)

But it is perfect for mimosas!

Once I added the fresh orange juice to this cheap Kirkland Signature prosecco, it actually tasted quite good.

Overall, Riley ended up having the same thoughts as me about this cheap prosecco – not great on it’s own, but makes an excellent mimosa.

For us though, this sparkling wine is a definite ‘no’ to drink by itself but a ‘yes’ for mimosas – and maybe other cocktails.

Overall, I think this flavor and taste is pretty typical for a bottle of prosecco, though I do recall some bottles of other brands that even orange juice couldn’t help!

So, if you make a lot of mimosas or prosecco cocktails, then I definitely recommend this Costco brand prosecco because it’s got a cheap price and it’s overall a great value.

And mixing it with something else masks that less an ‘superiore’ taste.

Who knows, you may even enjoy drinking it alone!