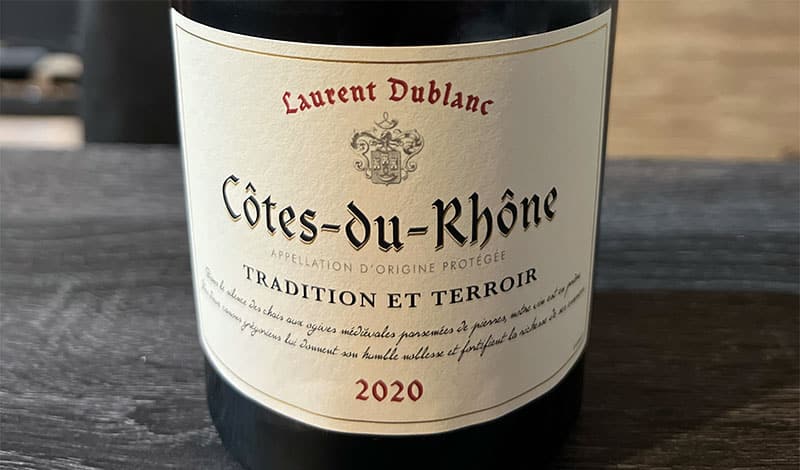 Recently on the hunt for a good cheap red wine from Trader Joes, I opted to try a bottle of Laurent Dublanc’s Côtes-du-Rhône.

Typically, French red wines are my favorite (and Riley’s), so I really felt like this was a good choice for us.

Plus, I tend to favor red wines made from Grenache and Syrah grapes and this one is a blend of Grenache, Mourvedre, and Syrah.

Add in the fact that this bottle is dirt cheap at only $6.99 at Trader Joe’s (as of 2022), and this looks like the trifecta of wine drinking for me (and likely most people).

All things considered, I really expected this bottle of Côtes-du-Rhône to be a good wine for the money.

Spoiler alert: I was wrong.

I was really excited to get into this bottle of wine because I was expecting great things. Really, really great things.

What I didn’t expect was to have a hard time actually getting the cork out as a result of the odd design of the top of the bottle.

You see that ridge protruding from the top of the bottle in the image above?

It is actually part of the bottle and is not something that you can remove. Madness, right?

Who goes and changes the design of a wine bottle, especially an under $10 bottle of wine?

And if you use the same type of corkscrew that I do, then you’ll have a heck of a time getting it to actually fit on the bottle so that you can remove the corkscrew.

I use a winged corkscrew, which you can see in the image above.

And what you need in order to easily remove the cork from this bottle is a simple waiter’s corkscrew.

Anyways, this dark red wine is supposed to have tasting notes of dark berries and fruits, which is normally my whole deal.

Well, upon first sip, Riley announced that it was terrible and that it tastes like medicine.

Not a ringing endorsement, eh?

I was yet to sample from my glass, so I inquired if it tasted like Nyquil?

Her reply? It tastes worse than Nyquil.

So, I was truly expecting the worst when I took my first drink, which may be why I did not find it to be all that bad.

Make no mistake, it was far from a good French red wine, but it didn’t taste like medicine to me.

But I did think it had a bit of a different taste than the normal red French wines that we drink.

After doing some research online, I discovered the culprit – licorice.

That is the taste that made Riley think it had the same flavor as medicine.

For us though, this wine is a definite ‘no’ and not something that we will be purchasing again…unless we forget that we’ve already had it!

Even at $6.99, I don’t think I’d ever buy this one again because I’ve had cheaper red wines that taste better.

Overall, I think this is quite bad for a French wine, which tends to be our favorite type of red wine.

But, if you enjoy the flavor of licorice in your red wine, then you may really enjoy this one. Good luck to ya with it.