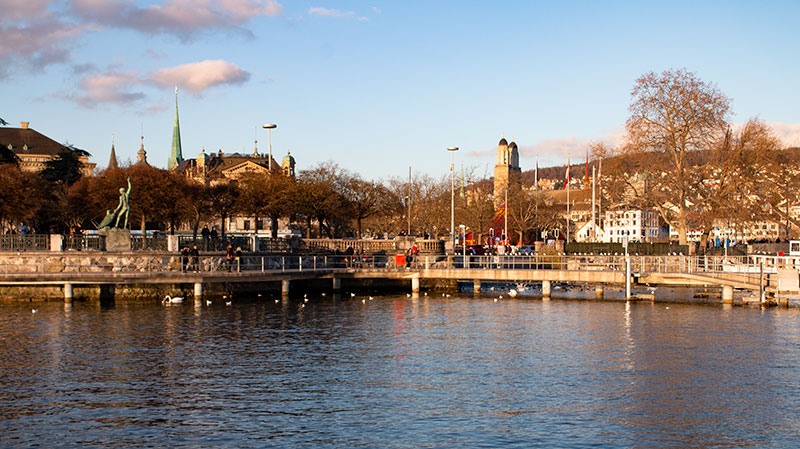 Zurich does finance. And chocolate. And a pretty magical display of lights if you’re there around the holidays.

They also do some pretty decent coffee. Though, you may not find it where you’re expecting it.

If I were to sum up Zurich’s coffee scene in a single word, that word would be intimate.

We can’t tell you where to find the best coffee in Zurich, since taste is subjective, but we did visit several coffee shops in two areas of Zurich where many tourists will be spending some of their time – around Zurich’s Old Town and Münsterhof Square.

For the most part, we taste-tested the same standard espresso drink, a cappuccino, to compare.

And, since Zurich is the most expensive city in the world, we’ve also included prices. 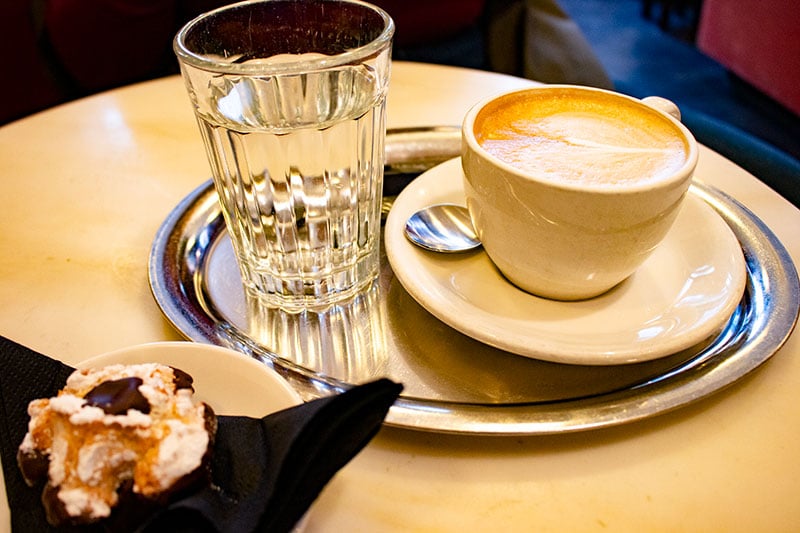 Located on Münstergasse, a main thoroughfare through Zurich’s Old Town, Schwarzenbach Teecafé is part of the Schwarzenbach store that has been selling bulk foods, like dried fruit, coffee, and tea for over one hundred years.

The beans might be freshly roasted, but that didn’t make the espresso good. What we tasted was a cappuccino that was impressively strong, but terribly bitter.

It was nigh on undrinkable without sugar. Luckily, it was served with water, which was desperately needed to cleanse our palates.

We got this cute little chocolate treat. The pastry name wasn’t on the case, so I don’t know what to call it.

It was a little cup of a thing – the tiniest treat they had – and incredibly rich, but super tasty. Better than its coffee counterpart for sure. 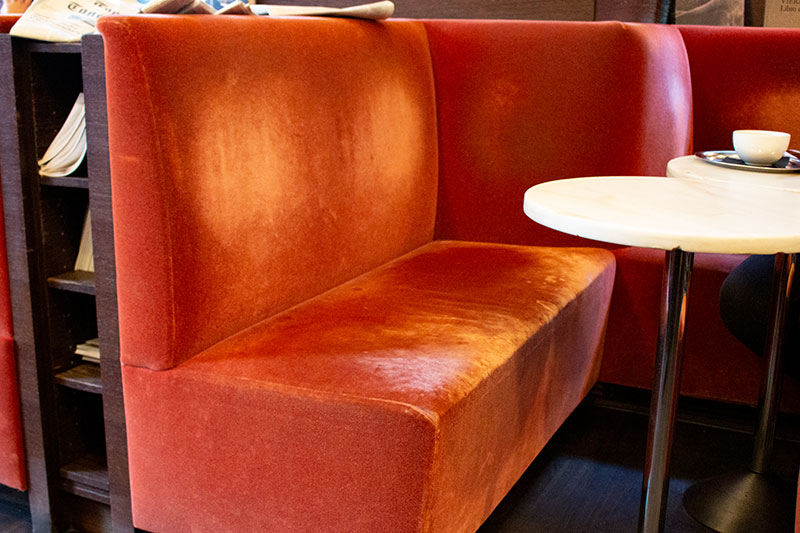 Though it’s situated on a tourist street, this place is undeniably a local. The tables were full of people reading or lingering to chat.

There are four main seating areas with bench-style seating, so unless you’re a large party (and if you are, plan to wait quite some time seats), you’ll almost certainly be sharing a section with strangers.

Which isn’t a bad thing.

The décor is nice. Very charming.

The exchange rate was just about even while we were there, so all these prices are pretty close to what they would have been in USD. 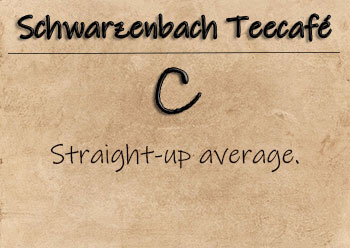 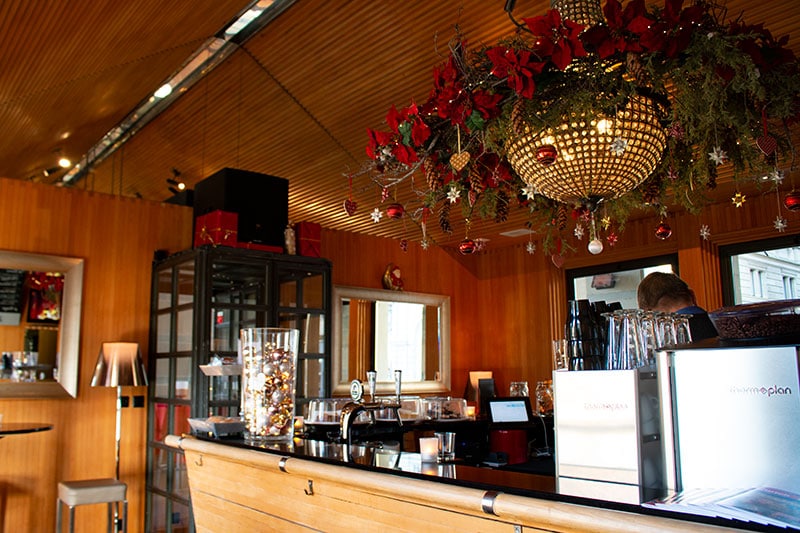 For us, the cappuccino at Schwarzenbach Teecafé was so tongue-torturingly bitter, we still needed coffee when we left.

So, we hit Google maps and went straight to the Rathaus Café on the Limmat River. It was a great by-chance find. 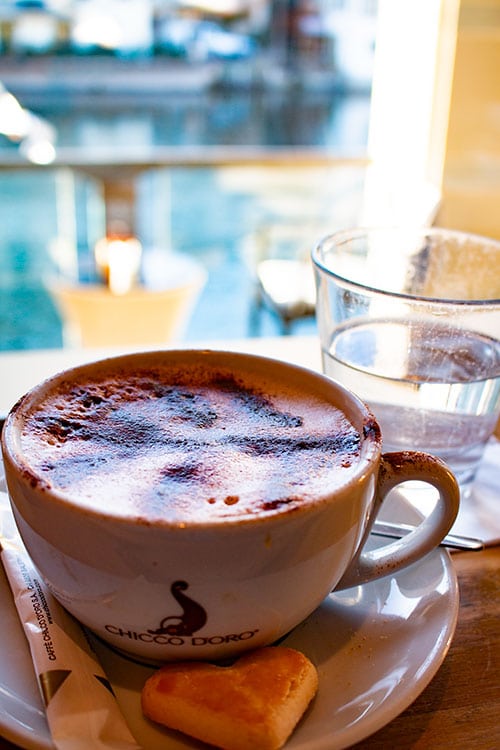 Our cappuccinos came out big, hot, strong, but very, very smooth. Bit foamy, which is, you know, a cappuccino.

But these might have been a tad-touch too foamy, given the price – 6.50 CHF a piece – and the size of the mugs.

They had a very limited assortment of pastries. We didn’t order anything.

But the cappuccino was served with a simple butter cookie. Basic, but better than nothing.

Plus, that typical European cup of water alongside your dehydrating joe.

Of all the coffee shops we went to in Zurich, this one was, by far, the most charming.

It’s a coffee shop/bar with a lodge-like interior and an amazing view of the river. 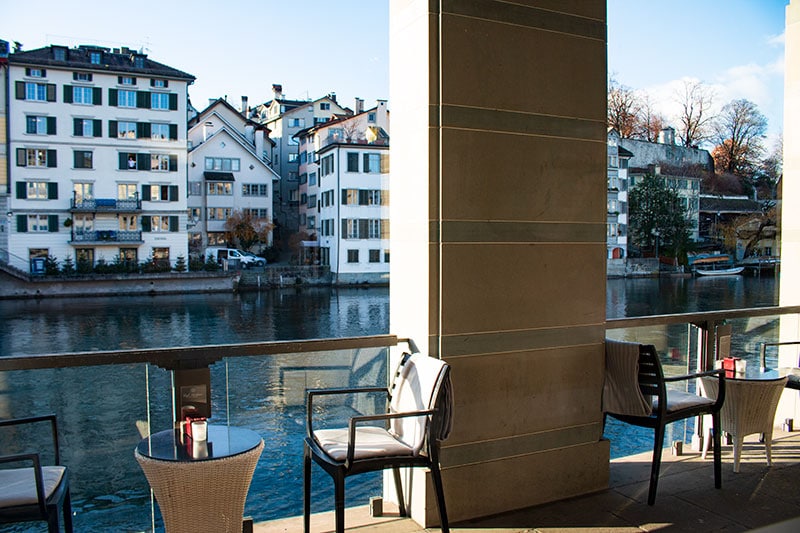 There’s also plenty of outdoor seating if you’re not there in December or enjoy shivering like some crazies who arrived after us.

There were blankets on the backs of the outside chairs, though, so…

It was close to Christmas, and the fireplace channel played on the TV.

There was also music. Playing at a perfectly reasonable volume.

Or maybe it just seemed like it because it was in excellent taste. The guy working there clearly dug Creedence.

And he was a super nice guy. Friendly and playful and unobtrusive.

When I went up to pay, he took the coffees he was making out to the two crazies sitting outside in the thirty-something degree (F) temps before taking my money. And, having had my own coffee sit for several minutes on a counter before it was served to me, I thought this was a proper decision. 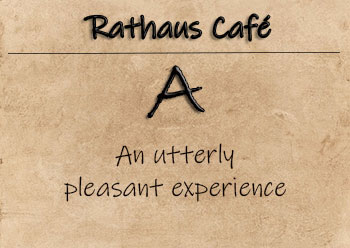 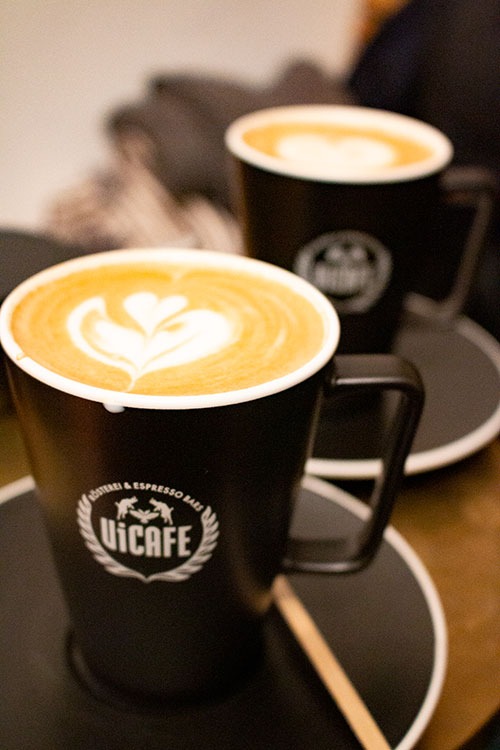 ViCAFE has one of the finest reputations for coffee in all of Zurich.  They roast their own beans, hence the Rösterei in their name.

Their Facebook page is full of love. It’s hard to find a bad review on the Internet.

Everyone, apparently, but us.

We ordered a flat white since there were no cappuccinos listed on the hand-written menu. They could have made one, I’m certain.

And we probably should have asked. But in a city where espresso drinks cost upwards of 6.00 CHF for a small (which means VERY SMALL), one doesn’t just go blindly ordering.

The flat white was smooth, though. Not too strong. Not too bitter.

The aftertaste was a little rough. But, then, we don’t like fruity espresso.

It was also pretty chilly. I know flat whites aren’t supposed to be as hot as other espresso drinks (and I do like a hot drink), but we’ve had flat whites in Australia. They were warmer than this.

We read about ViCAFE online before we went there. (A lot of people think it’s one of the best espresso bars in the city, if you’re looking for varied opinions.)

Our research uncovered a fruity bread that people rave about. So, that’s what we wanted to try.

But we were there in the last half hour they were open, and they only had croissants left.

There were a few crumbs of fruity bread on a tray if any eager mice happened by.

There are six Zurich locations of ViCAFE. We went to the one in Münsterhof square.

The place is tiny. Teensy-teensy tiny. There is one shared seating section in the back and a few stools by the door. It’s not a place to relax.

Plenty of outside seating, though, that probably would have been lovely at any other time of year.

And this was almost certainly a random “just the wrong time” sort of thing, but it didn’t smell great in there. I won’t try to describe the smell – that seems like a bad idea – but it certainly didn’t smell like a coffee shop should.

But flat whites are supposed to be small – about 5.5 ounces. And this one was. Very, very small. Hardly a bargain. 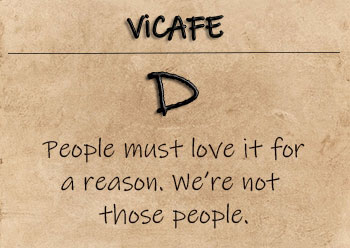 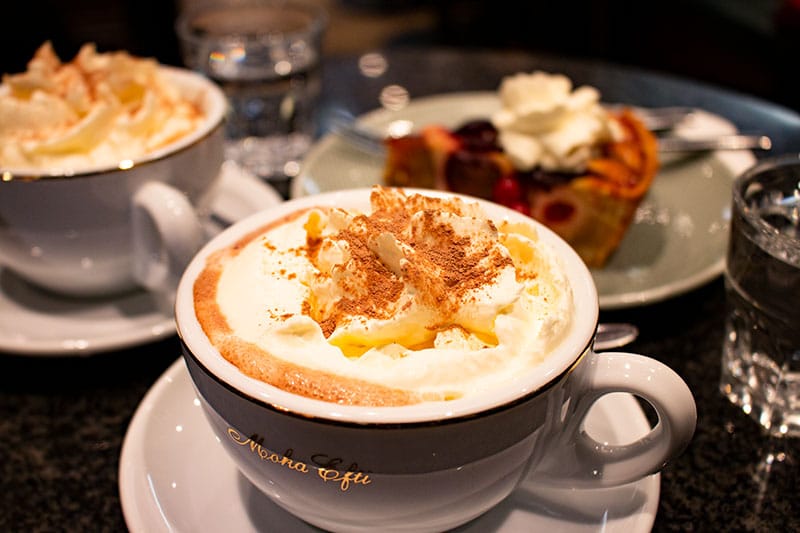 Since our visit to ViCAFE didn’t go as expected, we left hungry and still in need of an appropriate amount of coffee.

So, once again, we turned to Google Maps and hop-skipped the 150 feet to Zurich’s Café Presse Club, also in Münsterhof square.

We went a bit rogue when we got to Café Presse Club. There was a man sitting across from us with a fancy, whipped cream-topped concoction that was difficult to ignore.

So, we had what he was having. Well, one of us did.

The coffee was strong in this one. Would it have been drinkable without that hulking dollop of whipped cream?

Probably not without a spot of sugar. But that whip was scrumdiddlyumptious and a heck of a palate pleaser.

Came for the coffee. Stayed for the cream.

Moral of the story: When having kaffee in Zurich, do as the locals do.

There was supposed to be coffee in this somewhere, but it was deeply hidden beneath the cocoa-y flavor and the mound of whipped cream. The chocolate was the star of this show.

But it was a darn fine (ultra-rich) hot chocolate.

When we were there (around 6:30 p.m.), there were also plenty of people having a glass of wine.

But plum pie was such a desirable offering – one we don’t see served up many places – that it was impossible to resist. We didn’t even try. And we were glad we didn’t.

This “pie” was pretty tasty. I put pie in quotes here because what a lot of European countries call pie is not what we’re used to calling pie. Yes, it’s filling in a crust, but that crust is really more cake-like than crust like.

It was good, though. And they didn’t skimp on the plums. Two and a half plums total. I can say that with authority, because the plums were just cut in half and there were five pieces. 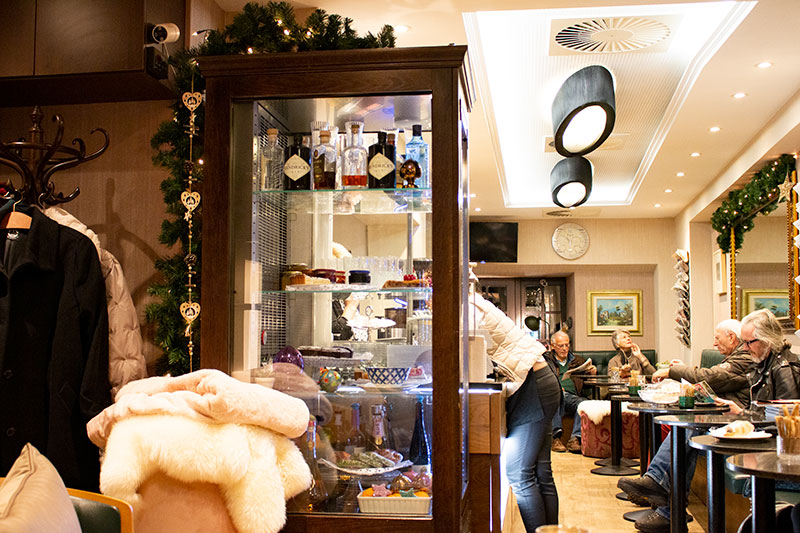 Yet another Zurich cafe in a tourist hotspot that was filled with locals.

No one was on a device. Half the people were reading the newspapers and magazines on-hand or books they’d brought with them.

The waitress was friendly, there was plenty of seating (both indoors and out). It was relatively quiet.

The sort of place that just invited you to read and relax. 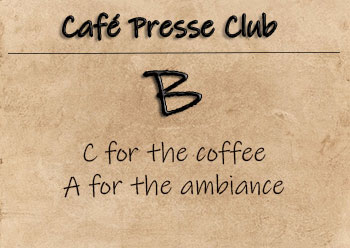 I know. But there were an oddly limited number of coffee shops near our hotel. Starbucks was the closest.

Plus, it’s worth mentioning for comparison purposes. Because if you walk into a Zurich Starbucks thinking it’s gonna be about the same price as it is everywhere else in the world, you are in for some serious sticker shock.

The good news is our morning cappuccinos were good.

Like any coffee shop chain where the drinks are made by hand, Starbucks isn’t always consistent. This location was, though.

Our coffees were delightful every day.

No oatmeal. That’s common at Starbucks in Europe. They don’t even just call it porridge. They simply don’t have it.

That means it’s either a pastry or a breakfast sandwich. These pre-packaged foodstuffs are all right in a pinch, but there are other, realer breakfasts out there.

Think of any Starbucks you’ve ever been in. Now, transfer it to Zurich.

And that ain’t with any trimmings, folks. That is just straight-up two shots with steamed milk topped with foam.

However, our Starbucks grandes were twice as big as any of the other cappuccinos we got in the city, so it was actually the best value for the money. 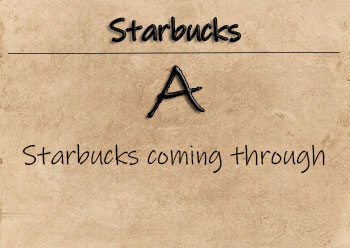