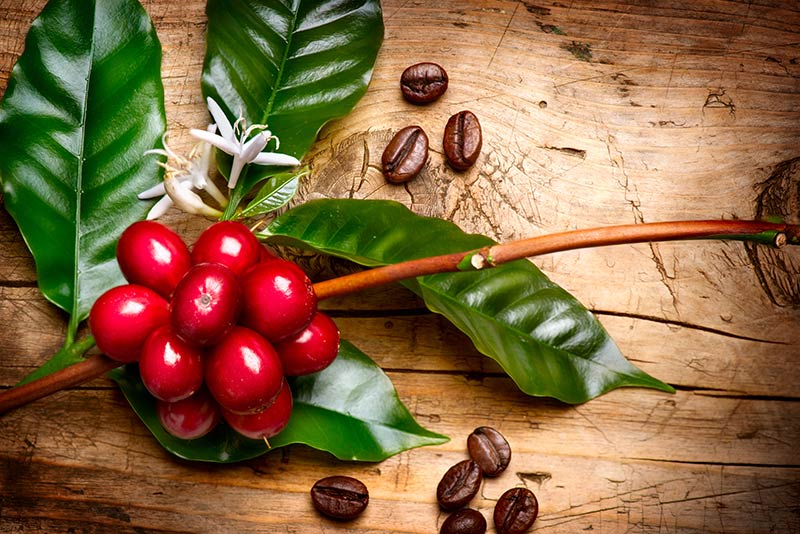 Coffee is no longer just a quick caffeine fix. For many people, it’s a way of life.

If you’ve visited any coffee shop in the last few years, you’ve noticed it’s much different than hitting up your local diner for a cup.

There are countless types of coffee to choose from. Coffee has become a culture in its own right, and there’s no looking back.

Millions of people around the world have said goodbye to the Folgers and Maxwell House of yesteryear in favor of single origin beans with specific flavor notes.

And instead of dumping a load of pre-ground coffee into a Mr. Coffee machine every morning, people are grinding beans fresh and hand pouring their coffee to perfection.

So, where do you start if you’re new to coffee culture? That’s where we come in. Keep reading for the ultimate guide on the types of coffee beans.

We’ll start by looking at the origins of coffee around the world and the different types that exist.

Where Coffee Comes From

Coffee begins its life as a bean. Beans come from different types of coffee trees, and each type has its own unique characteristics.

The coffee beans themselves grow inside coffee cherries. They’re a lot like regular cherries with an outside covering and a pit (or in this case, a bean) at the core.

There are six parts to the coffee cherry:

The bean at the core is obviously the important part, but the other elements have their place too. When coffee cherries are processed, farms use different techniques that utilize different parts of the cherry.

Interestingly, beans start out light green and only become brown once they’re roasted. A green coffee bean is a raw coffee bean and it sorta looks like a pistachio. 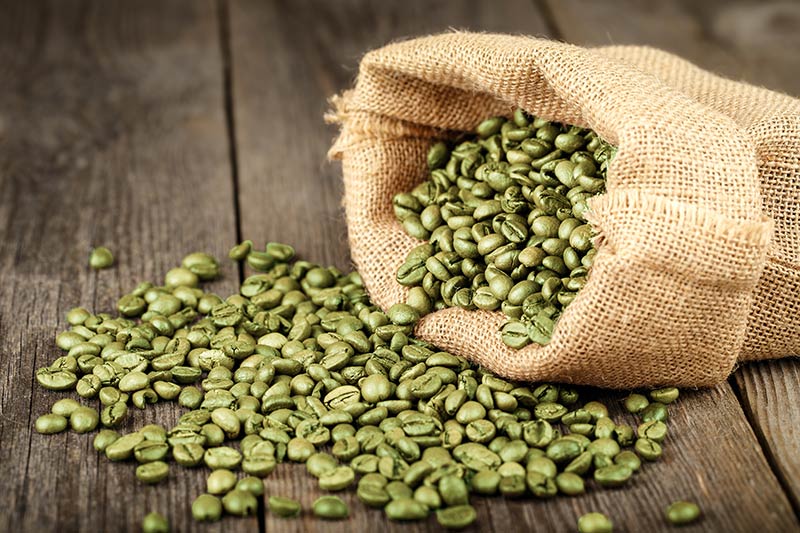 The way a bean will taste in the final cup is affected by several factors during these stages. Two of the most important factors in how coffee will taste are the type of coffee tree and the type of processing.

After cherries are picked and processed, the green beans are dried and prepared for shipment. These beans make it to the roasters, who turn them into the little brown beans we all know and love.

And there are probably more types of coffee beans than you might think.

For decades, the same few brands of coffee have been grocery store mainstays. As a result, the average consumer might think that there are only a few types of coffee.

It might come as a surprise that Stumptown Coffee Roasters lists 15 different types of coffee, but there are a few that are much more prevalent than others.

The most common varieties include Bourbon, heirloom, Gesha, and Typica.

While this isn’t related to the alcoholic beverage, the Bourbon variety is a standard coffee variety that produces a caramelly, chocolatey bean.

This type of coffee originated on the island of Bourbon, now called Réunion, which is located off the east coast of Madagascar.

Bourbon plants are most known for growing in Rwanda, although they have been transplanted to other countries in Central and South America.

This type of coffee is found in Ethiopia. Stumptown notes that each village in the country has its own variety of Heirloom, making it one of the most interesting kinds of coffee.

Ethiopian beans are renowned for their floral and berry tastes, and each subtype of Heirloom is a unique coffee of its own. Yirgacheffe, Harrar, Sidamo, and Kochere are just a few parts of the country known for their Heirlooms.

Easily the most mysterious type of coffee, Gesha is a temperamental plant that produces a smooth, tea-like coffee. Geshas are most ubiquitous in Africa, though they also grow in southeast Asia and Central and South America.

Gesha beans are also referred to as Geisha, and it’s hard to say which term is correct. Whichever is correct, there’s no doubt that this type of coffee is unlike any other.

This is the standard type of coffee plant, also known as Coffee Arabica Typica. Most other coffee plants are subtypes of Typica. Chances are if you head to your local roaster and pick up a bag of beans, those beans came from a Typica plant.

There are other less common subtypes of coffee as well. Here are some of the more commonly found subtypes:

An offshoot of the Bourbon variety, Caturra coffee was first produced in Brazil and has since spread to Central America.

It is a resilient plant that can produce a lot of coffee; however, sometimes the quality suffers because of this. A good Caturra is bright and tea-like.

Coffee grown in Colombia is a little different from any other coffee. Like Caturra, Colombian coffee is resilient and produces a lot of coffee. Colombian coffee can be chocolatey or cherry-like.

The history behind the SL plants is quite interesting. The research group Scott Laboratories was hired by the Kenyan government in the mid-1900s to develop more robust coffee plants that weren’t as susceptible to disease.

The SL28 was one of the plants that has survived to this day. It’s characterized by its citrus-heavy flavors.

The SL34 was another Scott Laboratories success. It is also citrus-heavy and sweet, and it serves as a good counterpart to the SL28.

There are more obscure varieties that you can read about on Stumptown’s website.

When it comes to types of coffee, there’s one more distinction to make: arabica beans versus robusta beans.

Both terms refer to species of coffee trees. Though both produce coffee beans, they are quite different when it comes to how they taste.

Arabica beans make up the majority of the world’s coffee production. All of the varieties of coffee listed above are Arabica.

Robusta beans, on the other hand, are indeed robust. They are much more hardy than Arabica plants, but they also produce coffee that is much stronger in flavor.

Arabica beans have a monopoly on the specialty coffee world. Because Arabica is more nuanced and flavorful than Robusta, it’s the type of choice for nearly every specialty or small batch roaster in the world.

Robusta has developed a bad reputation for being undrinkable, and it doesn’t help that many global coffee brands like Maxwell House either currently or previously incorporated Robusta into their offerings. (The reason? Robusta is much cheaper than Arabica.)

For more on the history of Arabica and Robusta, check out this writeup by Jerry Baldwin, one of the cofounders of Starbucks.

The Bean Belt – Where Coffee Grows

Coffee grows in tropical climates around the Equator. While coffee can technically grow anywhere the conditions are right, certain countries produce the lion’s share of coffee around the world.

This area on the Equator is known in the industry as “the Bean Belt.” According to Investopedia, as many as 70 countries produce coffee.

However, if you’ve read the labels on any whole bean bags, you’ve probably noticed the same countries popping up again and again.

Here are some of the countries you might see, going from most to least coffee produced.

Brazil is a huge country located near the Equator, so it’s no surprise that it produces more coffee than anywhere else in the world.

Brazilian beans are known for their rich, chocolatey taste.

Vietnam produces mainly Robusta beans, which might seem like an odd choice. But it works––they’re the second largest producer of coffee worldwide.

Vietnamese coffee is known for its strength, and there are several interesting drinks that citizens have created to tame the power of Robusta beans.

The country’s popularity owes some of its success to advertisements created by the National Federation of Coffee Growers of Colombia that featured a fictional coffee farmer named Juan Valdez.

Many of the islands in Indonesia grow coffee with a distinct, earthy taste.

Sumatra, Sulawesi, and Java (yes, the island that gave coffee a nickname) are three islands who have excellent track records when it comes to coffee.

Ethiopia produces some of the finest, most unique coffees in the world. No other country gives us beans that are so fruity and floral, thanks to the Heirloom trees that are bountiful.

There are a few other countries that produce notable coffee:

While it’s not as popular as its surrounding countries, Guatemala is the source for many well-balanced coffees.

Kenya coffees are distinct and different. While they can be fruity like Ethiopian coffees, they can also have a winey taste to them, and they’re often acidic (in a good way).

Okay, it’s not a country, but Hawaii makes up a big part of the United States’s coffee production.

Hawaii is really the only place in the USA where coffee can grow well, and the state’s Kona coffee variety is famous for its smooth, creamy taste.

This list of countries just scratches the surface. Great coffees grow all over the globe, from Jamaica (notable for its expensive Blue Mountain coffee) to China (which produces mainly commercial coffee). And recently, growers are experimenting with growing coffee in California.

Finally, let’s discuss some terminology you’ll need to be familiar with.

Most specialty coffees are single origins, meaning the entire bag of beans comes from just one place.

So when you see a bag that says Ethiopia Yirgacheffe, it means the beans are single origin and come from Yirgacheffe in Ethopia.

Other times, you’ll notice that some bags of beans say “blend.” Most roasters have house blends, for example, and many have seasonal blends.

This means that the bag has two or more different coffees that come from different places. For example, a blend may be composed of 50% Ethiopian beans and 50% Colombian beans.

Single origins are more complex, but the flavors can be much more vivid. Once you’ve tried blends for a month or two, give a single origin coffee a try.

Single origin coffee is also more difficult to make because it takes a little bit more nuance to bring out the sometimes subtle flavors.

If you have your brewing techniques down, you’ll enjoy all that a single origin has to offer. But if you’re still learning, try a blend, as it will be more forgiving.

Your local coffee roaster can help you decide what to try out, and don’t forget to check out the tasting notes so you’re sure to choose a coffee you’ll like.

Coffee is interesting not only for the culture but also its story. The different types of coffee around the world contribute to the global coffee community, and it’s fascinating to see how this caffeinated beverage starts out.

Knowing the different types of coffee and where they come from will allow you to recognize your favorite coffees. You’ll also be able to speak the language of coffee, which has many benefits.

For example, you’ll easily be able to find coffees similar to the ones you already enjoy.

Understanding coffee begins before the beans are roasted, and if you spend a little time to commit this knowledge to memory, you’ll have a much deeper understanding of your favorite morning beverage.