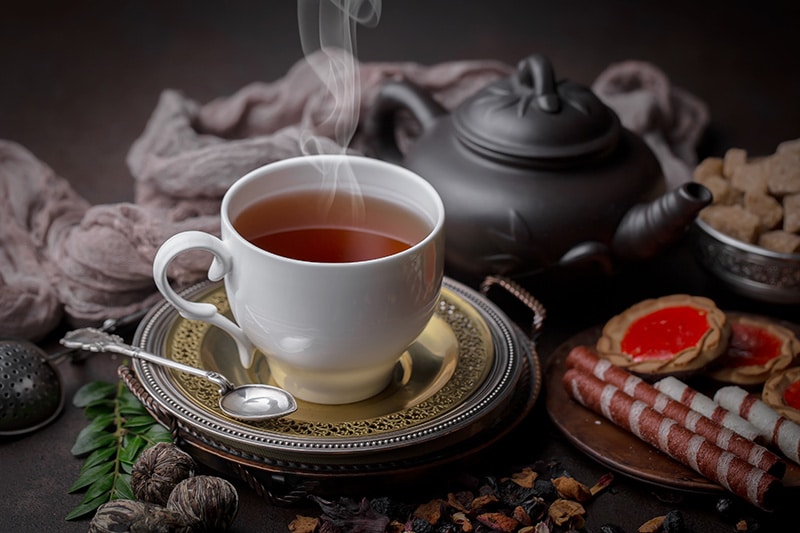 Whether you’re trying to limit your daily caffeine or just want to make sure you get a caffeinated jolt, knowing which teas are high in caffeine is essential for any tea drinker.

Generally speaking, the teas that are known for having a high caffeine content are black tea, mate, matcha, and pu-erh.

But it’s not as simple as giving you this list of teas because there are other factors than just the type of tea that affect its caffeine content.

So, if you’re ready to take a nerd journey on all things caffeine and tea, then keep reading.

Everything You Know About Caffeine In Tea Is Wrong

Before I started researching the caffeine amounts in tea for health reasons, I just always assumed that black tea was the highest no matter what.

Obviously, that was an incorrect assumption, as I’m about to explain to you.

What really matters is the brew time, or how long you leave that tea bag in the water to steep.

Brew time has more effect on a tea’s caffeine content than the type of tea.

I know what you’re thinking – this goes against everything you know about caffeinated teas.

This means that theoretically you could steep black tea for so long that it ends up having a caffeine content similar to a cup of brewed coffee.

And that’s just madness right there!

Now that I’ve blown your mind, let’s take a closer look at all of the things that affect the amount of caffeine in your cup of tea.

As mentioned above, the longer that you leave that tea bag (or loose tea) to steep, then the more caffeine you end up with in your cup of tea.

Of course, this means that you can effectively reduce the amount of caffeine in your daily cuppa simply by reducing the brew time.

The first thing you need to know about tea varietals is that all tea comes from the same plant, but that plant has two varietals that the tea leaves may come from.

How It Was Grown

Though it’s likely not something that you’ve ever thought about, the growing practices of the tea influence it’s caffeine levels.

Shade-grown tea plants, like matcha, Gyokuro and Kabusecha, are higher in caffeine than tea plants that are not shaded.

Another factor that you likely never spare a thought for is the harvest time of the tea plant.

This is because the early harvest time means that the leaves and buds are smaller, and that equals more caffeine.

There is more than one way that tea is processed, and that processing method affects caffeine levels.

For teas that resemble a fine powder, like matcha, the tea leaves have been ground up so that when you drink the tea you are consuming the entire leaf.

And that results in more caffeine in your cup of tea.

For teas where you have whole leaves, the caffeine content is lower due to you not actually consuming the leaves when you drink a loose leaf tea.

How Many Tea Leaves Are There?

This may be common sense to you, but the more tea leaves you have steeping in your cup, then the higher the caffeine level of your cup of tea.

So, if you are using loose leaf tea, then you can choose to brew fewer leaves for a reduced caffeine content.

And if you want a really strong, highly caffeinated tea, then you just use more tea leaves.

When you pour boiling water from your kettle onto your tea bags or tea leaves, as is common with black tea, that heat stimulates the caffeine and results in a more caffeine being released into your cup of tea.

If you let the boiling kettle water cool off a bit before brewing your tea, as is common with green tea, then you end up with a lower caffeine content in your cup of tea.

This is why black tea is traditionally known as having more caffeine than green tea – but as you know from above, that’s not always true.

If you’re a caffeine junkie, then you may be most interested in the teas that give you the biggest jolt of caffeine.

Here’s a list of the teas with the most caffeine:

Just keep in mind the factors above that affect caffeine levels, so you can make these teas have more caffeine simply by steeping them longer in your cup.

FAQs About Caffeine In Tea

Here are the answers to a few common questions about caffeine levels in teas.

Does all tea have caffeine?

Though not from the tea plant, mate also has caffeine.

Teas that do not have caffeine are herbal teas and rooibos teas.

Does green tea have caffeine?

Yes, green tea has caffeine as it comes from the camellia sinensis plant.

The naturally occurring levels of caffeine in green tea are lower than black tea and oolong tea.

The only exceptions to this are shade-grown green teas, Gyokuro and Kabusecha, which are higher in caffeine than green teas that are not shaded.

Which tea type has the most caffeine?

A cup of matcha tea tends to have the most caffeine per-cup than any other type of tea.

This is because the tea leaves have been ground up so that when you drink matcha you are consuming the entire leaf.

The runners-up for this title of most caffeinated tea are black tea and pu-erh tea, but keep in mind that is assuming average brew times and not shortened brew times.

How much caffeine is in a cup of tea vs coffee?

Assuming that you’re using average brew times, or the brew time listed on your tea, then you’re definitely going to get more caffeine from a cup of coffee.

No, boiling tea does not destroy, remove, or lower caffeine levels in tea.

However, shorter steeping time does reduce the caffeine in your cup of tea.

Which has more caffeine coffee or green tea?

On average, a cup of coffee is going to have a higher caffeine content than a cup of green tea.

Here’s a comparison of the caffeine in coffee vs green tea:

Which has more caffeine black or green tea?

Black tea traditionally has more caffeine than green tea, but you can reduce the amount of caffeine in your black tea by steeping it for less time.

Here’s a comparison of the caffeine in black tea vs green tea:

Does caffeine in tea expire?

If you’re wondering does expired tea still have caffeine, then the answer is – Yes.

When a tea expires, that just means that it loses its flavor and gets stale.

But expired tea has no effect on the tea’s caffeine level.

Yes, if you are sensitive to caffeine, then the caffeine content in your cup of tea may raise your blood pressure. (source)

Does tea lose its caffeine when refrigerated?

No, refrigerating your tea, or even making iced tea, does not change the amount of caffeine in the tea.

Will 2 tea bags double the caffeine?

Yes, doubling the tea bags in your cup of tea effectively doubles the caffeine amount. Assuming you are using identical tea bags.

The more tea bags you steep into a cup of water, the stronger the caffeine content is going to be.

Can you reduce caffeine in tea?

Yes, but only by reducing the brew time, or length of time that you let the tea steep in the water.

You can also use less tea, if you’re using loose leaf, in addition to shortening the steeping time.

As a result, there tends to be less caffeine in weak tea since it did not steep as long.

Which green tea has the least amount of caffeine?

This is because Hojicha tea is roasted green tea and the process of roasting breaks down the chemical of caffeine.

Hojicha tea has roughly the same amount of caffeine as Sencha green tea.

Which has more caffeine Matcha or Sencha?

How much caffeine if you reuse a tea bag?

So, if you are going to have more than one cup of tea anyways, then, yes, reusing the tea bag does reduce the total caffeine amount you’re consuming.