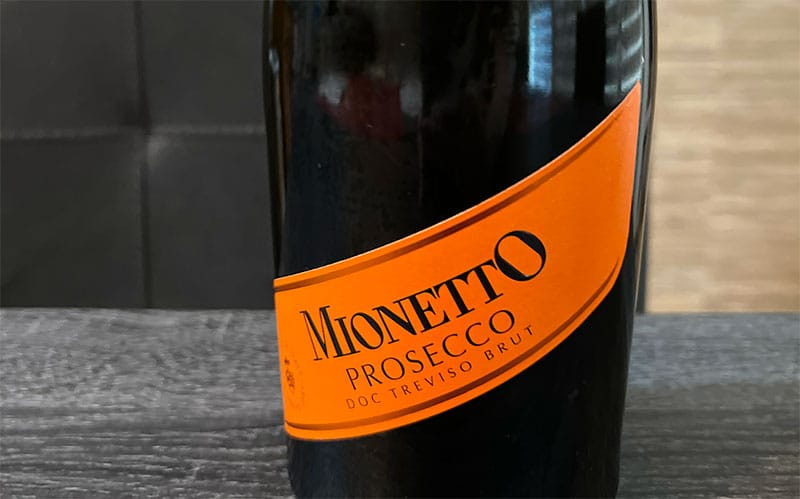 Recently I was looking for a way to improve the taste of some shockingly terrible blueberry wine, and decided to try adding some prosecco to it.

Since I was out of Costco Kirkland Signature Asolo Prosecco Superiore prosecco, I popped out to my local Smith’s grocery store to see what they had available in the cold case.

When I’m mixing sparkling wine with something else, it doesn’t need to have a great flavor on its own.

So, when I picked up this cheap bottle of prosecco, my decision to buy it was purely based on cost.

This was the cheapest prosecco in the cold case at my local Smith’s grocery store, which is why I chose it.

Even though I fully intended to use the Mionetto Prosecco as a mixer, I still gave it a sample by itself.

I’d say that it was just below average – didn’t taste any better than your typical cheap bottle of prosecco…but it maybe have tasted worse!

Expect to get that green apple sort of flavor at the start from this one, but it does get quickly overcome by a bit of an oaky taste, I think.

Regardless of what it is – the flavor is not good by itself.

If you shop based on cost, then know that this bottle has a higher cost than Costco Kirkland Signature Asolo Prosecco Superiore.

All things considered, I cannot see buying Mionetto Prosecco instead of a bottle of Kirkland Signature Asolo Prosecco Superiore.

Compared to the Kirkland Signature Asolo Prosecco Superiore, the Mionetto Prosecco does not taste as good and it has a higher cost.

And, I feel like the Mionetto Prosecco does not have as many bubbles as the Kirkland Signature Asolo Prosecco Superiore from Costco.

If you’re a value shopper when it comes to sparkling wine, then this is not the best value prosecco for the money.

On the final day of this bottle, we were out of juice and drank it straight.

With no mixers, this may actually be the worst sparkling wine that I’ve ever had the misfortune of drinking.

For us, this sparkling wine is a definite ‘no’ to drink by itself but a ‘maybe’ for mimosas – and maybe other cocktails – but only if you can’t get the Costo prosecco.

Even at the sale price of $10.99, I don’t think I’d recommend this one unless you didn’t have a better choice.

Overall, I think this flavor and taste is less than typical for a bottle of prosecco, because it’s just not drinkable on its own.

Over at Vivino, it currently has a rating of 3.6/5 from over 25,700 reviews. So, it’s clearly a popular purchase, probably due to the low cost.