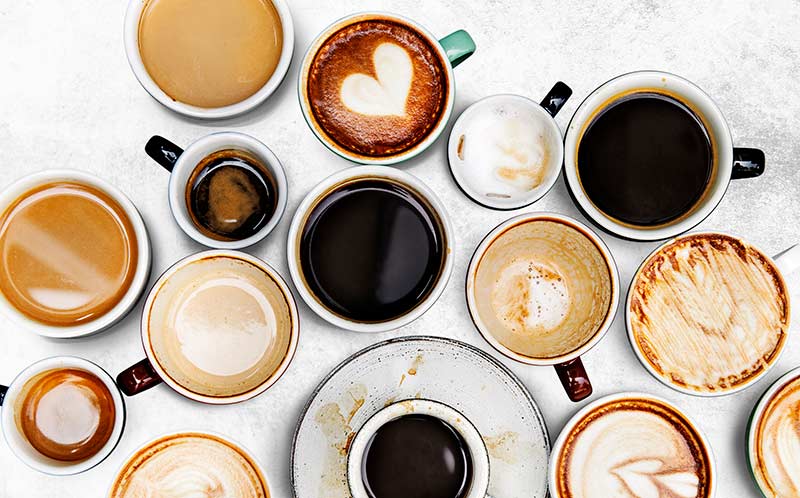 When you’re trying to cut back on (or just monitor) your caffeine intake, knowing how much caffeine is in each drink is essential.

Often, when people are comparing “strength” in caffeinated beverages, caffeine amount is what they mean.

But there is also the little matter of flavor/boldness, which can also be a meaning of the word “strong” in drinks.

So, first up the quick answers are:

But those are just simple answers to more complex questions.

So, now let’s get to the nitty gritty.

Is Espresso Stronger Than Coffee: Caffeine in Espresso vs Coffee

Espresso is coffee. That’s the first thing to keep in mind when talking about how much caffeine espresso or coffee contains.

Instead of being a separate drink, coffee is a method of brewing that forces hot water through finely-ground beans at high pressure.

This method of brewing extracts the oils (and, yes, the caffeine) from grounds more quickly, resulting in a stronger, smaller brew.

Meanwhile, coffee brews more slowly, whether it’s by drip, French press, pour over or any other traditional method of brewing.

These slow-brew techniques still extract the oils and caffeine from coffee, but they do so at a slower rate with a larger amount of water.

Since traditional coffee brewing techniques use more water over more time, they actually extract more oils and caffeine from coffee grounds than espresso, but due to the greater volume of water used, those oils and that caffeine are dispersed and diluted.

What you end up with from traditional brewing is a higher volume of drink, but a drink that has less oil (flavor) and less caffeine per ounce than espresso, though typically more caffeine overall.

That means the average espresso contains more than 5x the caffeine of coffee by ounce.

But espresso isn’t meant to be consumed in regular-sized quantities (like coffee).

It’s meant to be consumed in small quantities (shots) or incorporated with other ingredients.

So, can I just brew an ounce of coffee and get espresso?

No. Because, although water volume is one main difference between traditionally-brewed coffee and espresso, it’s not the only difference.

The pressure in an espresso machine (along with the size of the coffee grind) is what forces the oils and caffeine out of coffee grounds so quickly.

Other brewing techniques don’t rely on the same pressure.

Is Espresso Stronger Than Coffee: Flavor of Espresso vs Coffee

Now, onto the other possible meaning of “strong coffee” – flavor or boldness.

READ NOW  Can I Make Regular Coffee With An Espresso Machine?

Well, those oils are the flavor component of coffee.

So, it should come as no surprise that espresso tends to have a stronger flavor than brewed coffee as well.

While, in the end, long-brewing processes pull more oils out of coffee grounds, again those oils are dispersed and diluted.

In this way, you can think of brewed coffee as being “watered down” compared to espresso.

This may not be entirely fair to brewed coffee, and it certainly doesn’t mean coffee tastes bad compared to espresso (plenty of people prefer the taste of coffee).

But it does mean espresso doesn’t just subjectively have a stronger flavor than brewed coffee.

It actually does contain more flavor (oil) than brewed coffee ounce per ounce.

So, Is Espresso Stronger Than Coffee?

Yes, espresso is stronger than coffee.

When we’re talking the two main components of coffee – flavor (oils) and caffeine – espresso contains greater amounts of both per ounce, making it stronger than brewed coffee in both caffeination and taste.