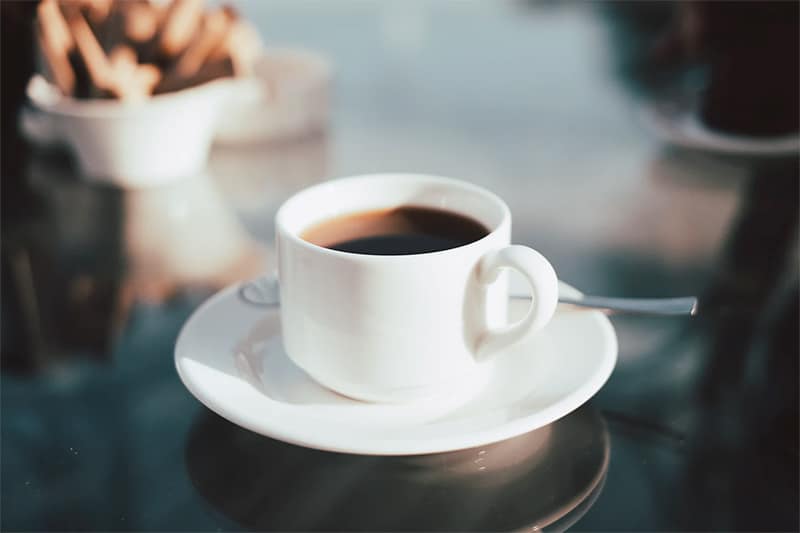 For years, I was firmly in the death before decaf camp, but as I’ve gotten older I’ve had to add decaf to my nightly coffee routine so that I get better sleep.

And if you’re wondering if there’s really any difference between decaf and regular coffee, then the answer is YES! There are several ways that they differ from one another, but the most noticeable way they differ is the amount of caffeine you get from a cup of decaf vs regular coffee.

If you’re interested in all the ways that these two types of coffee differ from each other, then keep reading as I share everything that I’ve learned.

Just don’t tell anyone that I’m drinking decaf in the evenings!

Contents show
8 Ways Regular Coffee and Decaf Coffee Differ When Compared
1. The Caffeine Content Per Cup
How Is The Caffeine Removed From Decaf Coffee?
2. The Acidity Levels
3. The Amount of Antioxidants
4. The Taste
5. The Effect On Mood and Mental Function
6. The Metabolism Boost
7. The Athletic Performance Boost
8. The Benefit For Your Liver
Which Is Better Decaf or Regular Coffee?
The Takeaway

Pretty much everyone already knows that decaf coffee is synonymous with no caffeine, right? Well, that’s not exactly true.

Decaf coffee does have caffeine – it’s just a very small amount compared to regular coffee. According to the Mayo Clinic,

Yowzers, that’s quite the difference in caffeine, eh?

Regular coffee has 48 times the amount of caffeine as decaf coffee!

As you might expect, that caffeine difference has a big effect on your body, especially how you sleep at night if you’ve had a cuppa too close to bedtime.

Note: actual caffeine content of a cup of coffee can vary quite a bit. Factors such as processing and brewing time affect the caffeine level.

How Is The Caffeine Removed From Decaf Coffee?

If you’re naturally curious, like me, then you might be wondering – how is decaf coffee made? Is it grown with less caffeine? Or is caffeine removed from regular coffee beans?

So, decaf is made by taking regular coffee beans and putting them through a decaffeination process. Here’s how this process works:

Pretty wild, eh? I’m sure it’s more nuanced than that, but this is the basic process.

I don’t know about you, but I really have that feeling you get sometimes in the bottom of your throat after drinking coffee. You know the one – where it feels all acid and bubbly.

Well, the acid, or pH levels, of coffee differs when you compare regular coffee to decaf coffee.

There is a common misconception here, with many people incorrectly assuming that decaf is more acidic because it is often made with Robusta (a naturally more acidic coffee bean).

So, if you are prone to acid reflux, then regular coffee is best avoided. To help you visualize this, here’s a quick science lesson in pH levels.

So, as you can see a pH level of 7 is neutral and black coffee comes in at a #5 on this chart, which means that it’s acidic but on the low end of that spectrum. And a study by Pico Technology tested the pH of black coffee and measured it at 5.51.

Where does decaf rank on the pH scale? It is slightly less acidic than black coffee, but I have been unable to get an exact measurement on that.

This study from 1994 on the effects of regular and decaf coffee on GERD and acid reflux concluded that decaf coffee has less acidity than regular coffee.

And this study from 2014 on antioxidant levels in coffee, which is linked to acidity, notes that decaf coffee is less acidic than regular coffee.

Note: you can lower the acidity level of your coffee by adding milk or more water.

It’s also important to note that different varieties of coffee have different levels of acidity. Henry’s House of Coffee did a really interesting test of all their coffee varieties and found the varying results that you see below.

3. The Amount of Antioxidants

One of the often touted benefits of coffee is that its packed with beneficial antioxidants. But did you know that not all coffees are created equal when it comes to these antioxidants?

A study from 2014 on antioxidant levels in regular and decaffeinated coffees concluded that regular coffee has more antioxidants present than in decaf coffee.

So, if you’re drinking coffee for you health, then it’s best to stick with regular coffee for the full antioxidant punch.

But if you do drink decaf, then you won’t lose much. Studies show you’re looking at a max of 15% fewer antioxidants in decaf coffee.

Once you’ve had decaf coffee, it’s easy to understand why the lower caffeinated version is on the receiving end of so much hate. It’s the taste difference.

Ask people who dislike decaf, and they’ll likely tell you that it has a bland, watery taste. And those of us who have to drink it in the evenings will never admit this to you!

The truth is that there really is a noticeable taste difference between the two — and there’s a good reason for it.

The decaffeinating process removes those flavors and oils that give coffee that yummy deliciousness that you’re used to. Without them, you end up with decaf – a not so great coffee substitute.

5. The Effect On Mood and Mental Function

Studies have shown that regular coffee offers a lot of benefits to the mind that you don’t get with decaf coffee. This includes:

You get all of those benefits from the caffeine in regular coffee, which means you don’t get quite the same benefit from drinking decaf.

If you’re the type of person who is concerned about body weight, then you might like to know that regular coffee boosts your metabolism and your body’s fat burning.

But neither of those boosts are seen when drinking decaf coffee.

So, while weight loss is no reason to choose regular coffee over decaf, it’s definitely interesting information to file away.

Do you work out a lot or compete in any sports? If so, then you’ll want to continue drinking regular coffee instead of switching to decaf.

So, if you’re getting reading to run a 5K or go to a really intense spin class, then fuel up with some regular coffee beforehand and ditch the decaf.

Cause you won’t see the same boost from drinking decaf.

8. The Benefit For Your Liver

Right now, you might not be giving much thought to your liver. I don’t. Except after those nights of drinking a bit too much wine.

But here’s the thing, drinking coffee is actually awesome for your liver … as long as you’re drinking regular coffee.

The regular coffee benefits to your liver include lower risk of liver cirrhosis or end stage liver damage. Boom!

Which Is Better Decaf or Regular Coffee?

Decaf coffee is only better for people who need to consume less caffeine or less acid. That’s why people drink decaf coffee.

Regular coffee provides health benefits that do not apply to decaf.

But decaf coffee has lower acid levels and less caffeine (if that interests you).

As you can see, the scales are largely in favor of regular coffee, but decaf does have it uses for those who need it.