If you’re like most coffee drinkers, then you always order the same drink – no matter what coffee shop you’re fueling up at. But what if you’re feeling adventurous and looking to try a new drink?

If you find yourself at a coffee shop with more than a basic drinks menu, then do something different and go with a new espresso drink. Not sure where to start?

What’s more adventurous than getting a bit of international flair with your daily jolt of caffeine?

Contents show
What Is A Flat White?
What Is A Cortado?
The Takeaway

What Is A Flat White?

If you’ve ever been to Australia, then you already know that a flat white is THE coffee to drink in the land down under. Hell, I wouldn’t be surprised if it’s the national drink. 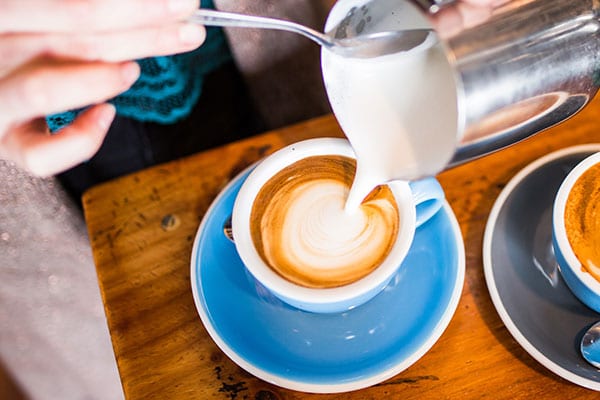 These days you can order up a flat white at Starbucks and all sorts of of other coffee shops, both the hipster and non-hipster variety. But be warned – not all baristas are capable of pulling off this drink the right way.

At it’s core, the drink it just two shots of espresso with foamed milk. But doing that milk the right way is the key between successfully pulling this drink off and serving up another failed espresso drink.

A flat white has a double shot of espresso combined with micro-foamed milk.

The micro-foamed milk is where many baristas fail. The milk must be heated consistently all the way through so it does not split into bubbled froth and scalding liquid.

Due to the method required to perfectly micro-foam the milk, a flat white is served at a temperature a little cooler than your average cappuccino.

Once the milk is ready, it gets poured into the cup with the espresso. And unlike a latte, the milk and espresso are freely poured, which gives the drink a nice consistency.

Australian actor Hugh Jackman describes this drink as “like a latte with a little less milk and more espresso.” It’s highly caffeinated yet still velvety smooth.

Though you won’t get it this way at Starbucks, the right way to serve a flat white is in a 165ml tulip cup (approx. 5.5 fl oz). So, it is a smaller espresso drink than a cappuccino and latte.

Cool trivia: Though Australia comes to most people’s mind as the birthplace of the flat white, the origin is actually hotly contested. You see, New Zealand claims that they created it and Australia stole it.

Of course, Australia says that’s not true. All we really know for sure is that the drink started showing up in the region in the 1980s with no real clarity on who started it.

Originating in Spain, the cortado is actually very similar to the flat white. The key difference here is all in the milk.

And it will be served up in a cup size ranging from five to seven ounces. But it’s not really a cortado unless the milk is done properly for the drink.

In a cortado, the espresso is cut with an equal part of steamed milk – but the milk is not textured.

When making a cortado, the consistency of the steamed milk is very important because it is not textured.

Compared to the thick and velvety flat white, a cortado has a smooth consistency.

If you’re still a bit confused, then let’s dig a bit deeper on the milk consistency for a moment. When you steam the milk for a cortado, it’s basically lightly steamed because there’s no froth or foam. On the flip side, the milk steamed for the flat white has that frothy, foamy texture to it.

Since the milk for the cortado is lightly steamed, this means that a cortado is not as hot of a drink as the flat white. If you enjoy a really hot coffee, like me, then this is valuable information to remember.

It’s important to note that some coffee shops make their cortados differently. For instance, Caffe Nero makes theirs with a 1:2 espresso to milk ratio, so you end up with a sweeter taste.

Typically, a cortado is a not as sweet tasting as a flat white, due to there being less milk in it.

And for a cortado to be served up properly, it should come out in a small cortado glass. If the barista is trying to serve yours in a mug, then it’s probably going to be a latte instead of a cortado.

Cool trivia: On the West Coast in the USA, the cortado is known as a “Gibraltar.” This is because Blue Bottle Coffee started serving up this drink in one of their San Francisco cafes and named it after the glass they serve it in.

The name caught on, with coffee shops up and down the West Coast putting cortados on the menu as Gibraltars. But don’t worry, it’s still known as a cortado in the rest of the USA.

To make your decision easier, here’s the differences that you can use to determine which drink to order.